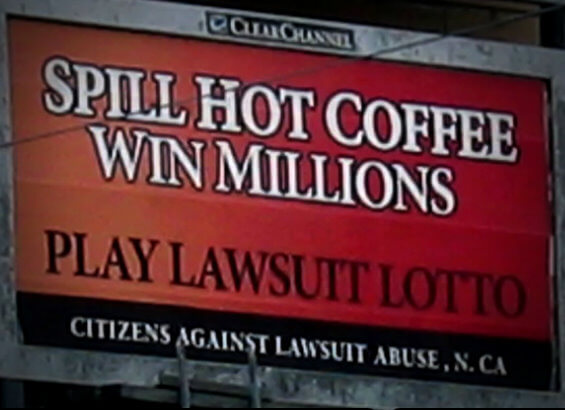 Over the past 30 years, I’ve represented people who have been seriously injured as the result of the negligence of a third party.  I’ve also watched in amazement as the legal system has become stacked against my clients.  Susan Saladoff, a former Plaintiff’s attorney, dropped her legal career three years ago because she had become frustrated with a system that she felt would not provide justice for her clients.  She represented people who had primarily been injured as a result of medical malpractice.  After leaving the practice of law, she began working on a film entitled “Hot Coffee”, a pro-plaintiff documentary which has been airing on HBO.  The film is named for the infamous 1994 McDonald’s case where an elderly woman, Stella Liebeck, was awarded $2.86 million after spilling a 49 cent cup of coffee she had purchased from a McDonald’s drive-thru window.  This case may be one of the most misunderstood in recent history and it is still the butt of jokes and commentary by comedians, journalists and politicians alike.  Unfortunately, the case also became the poster child for the tort reform movement and efforts to place a cap on damage awards primarily for pain and suffering.

“Hot Coffee” attempts to even the playing field by explaining the seriousness of Liebeck’s injuries and the evidence presented by Liebeck’s attorneys at the time of trial.  During the case, Liebeck’s attorneys discovered that McDonald’s required franchises to serve coffee at 180-190°F.  At that temperature, they asserted the coffee would cause a third degree burn in 2-7 seconds.  They also presented evidence that a number of other establishments served coffee at a substantially lower temperature which would increase the burn time to almost 15-20 seconds.  They argued that these extra seconds could provide adequate time to remove the coffee from exposed skin thereby preventing the burns.  Other documents obtained from McDonald’s showed that from 1982 to 1992 the company had received more than 700 reports of people burned by McDonald’s coffee to varying degrees of severity, and McDonald’s had settled claims arising from scalding injuries for more than $500,000.  Nonetheless, McDonald’s Quality Control Manager, Christopher Appleton, testified that this number of injuries was insufficient to cause the company to evaluate its practices.  Appleton also conceded that McDonald’s coffee would burn the mouth and throat if consumed when served.

The spill occurred as Liebeck was in the passenger seat attempting to add cream and sugar to her coffee.  She placed the cup between her knees and in the process of removing the lid, she spilled the coffee on her lap.  Her sweatpants absorbed the coffee and held it against her skin, scalding her thighs, buttocks and groin.  She suffered third degree burns and remained in the hospital for 8 days while undergoing skin grafting.  She lost 20% of her body weight and required two years of medical treatment.  Liebeck sought to settle the case with McDonald’s for $20,000 to cover her actual and future medical expenses and her loss of income.  McDonald’s offered $800.  Liebeck then retained Texas attorney, Reed Morgan, who filed suit in New Mexico District Court and who tried to settle the case with McDonald’s for $90,000.  McDonald’s refused final pre-trial attempts to settle.  The 12-person jury reached its verdict on August 18, 1994, and found McDonald’s 80% responsible for the incident and Liebeck 20% at fault.  They awarded Liebeck $200,000 in compensatory damages, which was then reduced by 20% to $160,000.  In addition, they awarded $2.7 million in punitive damages to penalize McDonald’s for one or two days worth of coffee revenues which were about $1.35 million per day.  The judge reduced the punitive damages to $480,000 for a total award of $680,000.  After appeal, the parties settled out of court for an undisclosed amount less than $600,000.  Now you have the real facts.

“Hot Coffee” attempts to set the record straight.  Predictably, the film has been denounced by legal reform groups as propaganda by the trial lawyers while the plaintiff’s bar has applauded the film as long overdue in balancing the national debate.  For over 20 years, insurance companies, medical organizations, big business, and their lobbyists have spent millions trying to persuade the public and the government of the need to cap damages and they have used cases similar to Liebeck’s as their example of frivolous litigation.  Shortly after the Liebeck jury award, ABC News called the case “the poster child of excessive lawsuits”.

Saladoff’s film highlights the McDonald’s case as well as a Nebraska family with a son whose brain damage might have been prevented at birth; a former Mississippi Supreme Court Justice who was defeated for re-election; and a Texas woman who reported being raped while working in Iraq but whose employment contract with KBR Inc. required mandatory arbitration to settle the claim.

If you have the opportunity, “Hot Coffee” is currently running on HBO and it has the potential to educate people on the myths and misconceptions of tort reform.