Luca Brasi Sleeps With The Fishes 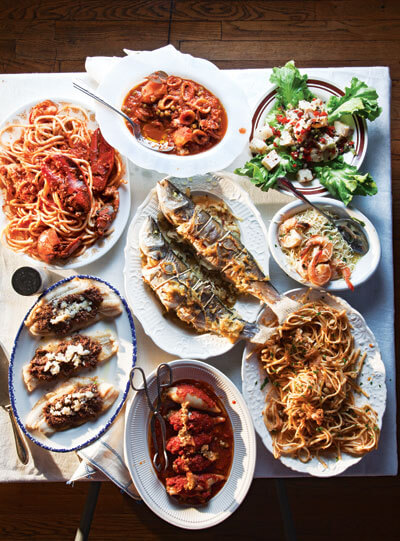 “LUCA BRASI SLEEPS WITH THE FISHES”

Sleeping with the fishes is a reference to an old Sicilian message.  Fish are wrapped in an article of clothing belonging to a person who has been hit, whacked, or otherwise killed, and it is then wrapped in newspaper and delivered to the Capos.  The delivery signifies that the member is dead and at the bottom of the sea.

But for Grandmom Stampone and all Stampones who have followed her, sleeping with the fishes is my reference to the hard work leading up to an elaborate multicourse celebration of La Vigilia (Eve in Italian), which takes place on Christmas Eve.

Christmas Eve in Italy is a day of fasting particularly in seafood rich southern Italy.  Italian Americans, many of whom are of southern Italian extraction, continue the tradition of La Vigilia by celebrating the Feast of the Seven Fishes.  Although I refer to “sleeping with the fishes” in jest, our family celebration more often than not includes many more seafood dishes than just seven – – and Grandmom literally spent days preparing for the feast – – she really did have to sleep with the fish!  We continue this tradition each Christmas Eve at my parent’s home with the entire family involved.  Pete and Joan invite their children, grandchildren, nieces, nephews, cousins, and friends alike – – all are welcome.  Of course, multiple courses of macaroni, meatballs, sausage, antipasti, and other non-fish dishes are also included in this evening long parade of sumptuous traditional menu items.

The feast commemorates the wait for the birth of Jesus; and since eating meat was not an option on Holy Days, it features fish.  But historically no one seems to know why seven.  Grandmom said it represented the seven sacraments of the Roman Catholic Church.  Others claim it is the seven virtues.  And still others, sipping homemade wine or anisette, would argue it represents perfection.  But the number seven doesn’t matter, what matters is the togetherness that has continued in our family for the better part of 100 years.  Our meal always opens with the humblest of species, smelts and baccala, followed by such delicacies as calamari, white anchovy, Sicilian sardines, scampi, tonno, crab, claims and mussels, and any number of whole fish from flounder to branzino.    Anyway you serve it, millions of Italian Americans across the country have long been celebrating La Vigilia so I’m sure their families as well have slept with the fish.