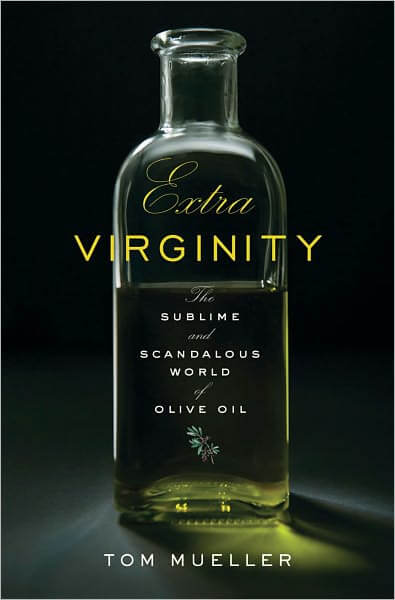 Anyone who is a fan of the Food Network quickly recognizes the reference to EVOO – Extra Virgin Olive Oil.  What most people don’t know, is what we typically buy off the supermarket shelf and even from specialty stores, falls far short of the high standards that define this remarkable substance.   I recently read the book, “Extra Virginity, the Sublime and Scandalous World of Olive Oil”, by Tom Mueller.   I’ll share his wisdom.

For a thousand years, olive oil has been a sacred symbol of religious rituals not to mention its medicinal qualities, and its use as a beauty aid.  The most aromatic of oils, it is extracted from a fruit rather than a seed, like sunflower, canola or soy oil.

But this symbol of purity is the subject of a deeply corrupt marketplace of fake products.  One of the most respected private olive oil associations is the Corporazione Mastri Oleari located in Milan.  The organization’s tasting panel adheres to strict protocol prescribed by Italian law.  Panel members train their senses to detect the faintest of flaws.  Tasters cradle brandy snifter style glasses in their palms as they smell the fragrances.  They then take a mouthful of oil by a technique known as strippaggio which causes them to suck air at the corner of their mouths which coats the taste buds and causes the oil’s aroma to travel into the nasal passages.

Unfortunately, the product which most of us have access to is not the oil of hardworking artisan producers who live to conserve the ancient and local Italian traditions, but rather a product of fraud and deceit – – some of it isn’t even made from olives.

In many ways, the most important oil producing place in the world is the region of Puglia, the heel of the Italian boot.  This area has produced oil for thousands of years, when the hillsides of famous oil areas like Tuscany and Spain were bare of groves.  Wild olives have thrived and survived in Puglia’s hot dry climate since the Ice Age where it has been a staple forever.

True EVOO is pressed or spun out of the olive pulp, yielding a fresh squeezed fruit juice with all its health enhancing ingredients intact.  Seed oils on the other hand generally require the use of solvents such as hexane for extraction.  The solvent must then be removed to eliminate unpleasant tastes and odor.  Removal occurs in a refinery where the seed oil undergoes desolventization, deodorization, bleaching and degumming.  The result is tasteless, odorless, colorless liquid fat.

The majority of olive oil now produced by multinational corporations is not EVOO despite the labeling of bottles.  Nor is it “cold
pressed”, “first pressed” or even made from olives grown in Italy.  Let the buyer beware, bottles labeled “Product of Italy” hardly guarantee the purchase of EVOO.  More likely you have purchased oil from olives shipped to Italy from places like Spain and North Africa which are relabeled as Italian.  In Italy, a range of enforcement agencies work to protect the food industry, but their efforts fall short and fraud is rising steeply

The size of the food and agriculture sector is estimated to be $5 trillion worldwide.  The enormous profits associated with food allow the unscrupulous to influence legislation, pay for campaign advertising, and otherwise silence those who question their practices.

Fortunately, true oil producers in Italy are pioneers in what has become a renaissance in EVOO.  New technologies, advances in botany and agronomy have enabled skilled Italian producers to make some of the best and healthiest oils.  Hardworking producers are creating oils with personality.  In Italy, training courses for oil sommeliers are becoming popular.  Oil bars, on the model of wine bars, are becoming popular, and restaurants are offering an oil list, similar to a wine list.  The oil list identifies different characteristics to match various dishes.  Over the last 15 years, the olive oil boom has increased consumption two-fold in North America, tripled it in Northern Europe, and six-fold in Asia.

The difficulty for us as consumers is that despite the flourishing market, true quality producers are struggling.  The wholesale price of EVOO, or what is classified as such, has plummeted over the last 10 years.  Mostly due to the questionable production techniques of the conglomerates.

The rare art employed by producers of quality oil simply can’t compete.  Consequently, olive oil has become one of the most adulterated of food products, particularly in Italy, who is the leading importer, consumer, and exporter of olive oil.  Most scams involve the mixing of low grade vegetable oils flavored and colored with plant extracts and sold in tins and bottles with fancy Italian flags and paintings, and imaginary producer names.

There is a quality divide between true extra virgin oils and the supermarket version.  Fortunately for the American consumer, organizations like the Culinary Institute of America have joined the experiment and are creating standards to allow us to identify and enjoy truly great Extra Virgin Olive Oil…The Queen of Fats.

The Romans, who created one of the longest lasting empires in history created the phrase “caveat emptor”…”let the buyer beware”.  When you purchased an amphora of oil in the Roman world, you knew from the label exactly what you were getting.  We can only hope that our journey takes us full circle and we can celebrate and enjoy the extraordinary oils that deserve the name “Extra Virgin”.