The Month of Romance 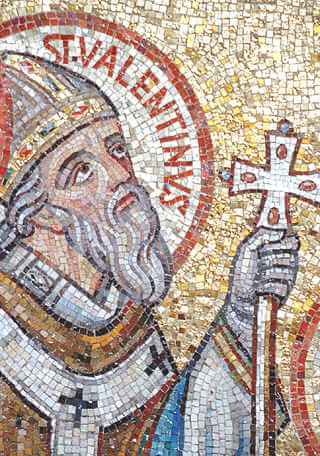 The history of Valentine’s Day – – and the story of its patron saint – – is shrouded in mystery and contains vestiges of both Christian and ancient Roman tradition.  But who was Saint Valentine, and how did he become associated with February, the month of romance?  The Catholic Church recognizes at least three different saints named Valentine or Valentinus, all of whom were martyred.

The Valentines honored on February 14 are Valentine of Rome and Valentine of Terni.  Valentine of Rome was a priest in Rome who was martyred about AD 269 and was buried on the Via Flaminia.   His relics are at the Church of Saint Praxed in Rome, and at Whitefriar Street Carmelite Church in Dublin, Ireland.

Valentine of Terni became Bishop of Interamna (modern Terni) about AD 197 and is said to have been martyred during the persecution under the Roman Emperor, Aurelian.  He is also buried on the Via Flaminia, but in a different location than Valentine of Rome.  His relics are at the Basilica of Saint Valentine in Terni (Basilica di San Valentino).

A third saint named Valentine was also mentioned in early martyrologies under date of February 14.  He was martyred in Africa with a number of companions, but nothing more is known about him.

No romantic elements are present in the original early medieval biographies of these martyrs.  By the time a Saint Valentine became linked to romance in the 14th century, distinctions between Valentine of Rome and Valentine of Terni were utterly lost.

Other stories suggest that Valentine may have been killed for attempting to help Christians escape harsh Roman prisons, where they were often beaten and tortured.  According to one legend, an imprisoned Valentine actually sent the first “valentine” greeting himself after he fell in love with a young girl – – possibly his jailor’s daughter – – who visited him during his confinement.  Before his death, it is alleged that he wrote her a letter signed “From your Valentine”, an expression that is still in use today.  Although the truth behind the Valentine legends is murky, the stories all emphasize his appeal as a sympathetic, heroic and – – most importantly – – romantic figure.

At the end of the 5th century, Pope Gelasius declared February 14 St. Valentine’s Day.  It was not until much later, however, that the day became definitively associated with love.  Valentine greetings were popular as far back as the Middle Ages, though written Valentine’s didn’t begin to appear until after 1400.  The oldest known valentine still in existence today was a poem written in 1415 by Charles, Duke of Orleans, to his wife while he was imprisoned in the Tower of London.

By the middle of the 18th century, it was common for friends and lovers of all social classes to exchange small tokens of affection or handwritten notes, and by 1900 printed cards began to replace written letters due to improvements in printing technology.  Ready-made cards were an easy way for people to express their emotions in a time when direct expression of one’s feelings was discouraged.

Americans began exchanging hand-made valentines in the early 1700s.  In the 1840s, Esther A. Howland began selling the first mass produced valentines in America.  Howland, known as the “Mother of the Valentine”, made elaborate creations with real lace, ribbons and colorful pictures known as “scrap”.  Today, according to the Greeting Card Association, an estimated 1 billion Valentine’s Day cards are sent each year, making Valentine’s Day the second largest card-sending holiday of the year.  (An estimated 2.6 billion cards are sent for Christmas). Women purchase approximately 85 percent of all valentines.

The most popular way of celebrating Valentine’s Day is to go for a romantic date with your sweetheart.  One can find restaurants thronged by lovers holding hands and expressing love.  So for those of you who choose to become engaged or married on this most romantic of holidays, I provide one cautionary message, “Marriage is grand, but divorce is a hundred grand…” 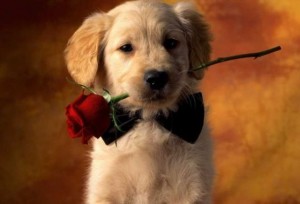