It seems like only yesterday, my first legal employer was giving me two weeks notice from his executive suite on the 7th Floor of Two Penn Center.   Tony Baloney, aside from being a high level executive and department head in the Rizzo Administration, was also a very successful personal injury attorney.  He was bright, good looking, always impeccably dressed, and could be exceptionally generous….. as long as it served his purpose.  I was hired in 1982 shortly after graduating from law school and while employed as a law clerk for the Honorable Albert F. Sabo in the Philadelphia Court of Common Pleas.  Being hired by Tony, while clerking for Judge Sabo, was the best thing that could have happened to me fresh out of law school.  He threw me to the wolves and I quickly learned how to handle a personal injury matter from new client signup to trial.  Since Tony spent the majority of his day at his City office, I had to do it all – – and we made money, lots of money.  We were a great tandem, clicking on all cylinders.  Monogramed shirts, Jaguars, Ferraris, and a cigarette boat named “No Fault”.  Life was good, especially for Tony.

rendering him comatose and disabling him for the better part of a year.  What now?  I wasn’t prepared to run the office without a mentor.  Enter Drew D’Angelo, Tony’s longtime associate from the City Solicitor’s Office.  Drew was an experienced trial lawyer who stepped up to the plate and he and I kept the firm afloat all the while visiting Tony on a daily basis in hopes he would recover and

return to the practice.  No easy task for a fledgling second year lawyer and a guy who did not want to talk to the clients, let alone meet with them.  But somehow Drew and I pulled it off.  The firm continued to prosper and Tony recovered, or so we thought.  But something wasn’t right; it wasn’t the same Tony.  Fast forward six months or so and I receive a call falsely accusing Drew and I of inappropriate activity and instructing me I have two weeks to “get out”.  Some thank you.  Always the fearless optimist, I respond without thinking, “I’ll be out in two hours”. First phone call, “Julia, put the kids in the Volvo and meet me at the office.  I’ll explain later.”  Second call, “Curt, it’s Cuz, need you to meet me at the office in the Datsun B210, have to haul some files.”  Julia and Curt, now that’s two people you want with you in a foxhole.  And so it was, within an hour, I was loading my books, documents, personal belongings, and my nine client files into the baby blue DL Wagon and the grass green hatchback (which Julia and I sold to Curt) and headed for an unknown destination to set up shop.

As always, I met my two hour self-imposed deadline…and Tony knew I would.  He just lost an employee who was never late and who was timely in every aspect of his young career.  Just one of the traits that made us tick.  There was no exchange of pleasantries on the way out the door – – unless you consider Curt’s threat to whack him with a staple gun a pleasant goodbye.

What a great business plan.  Two kids under the age of 4, a mortgage, a car payment, little to no bank account, no health insurance, no office, no secretary, not even a typewriter, remember those?  But I had a secret weapon.  Something stronger than kryptonite and it came in the form of friends and family.  Could there be a more powerful business asset to build upon?

So I put my unplanned plan into action and called the old man.  “Yo Dad, I need you to transform the store into an office.”  The store was a dilapidated building next to my childhood home where my parents and grandmother still lived and which had been vacant for many years.  That childhood home was the same house my mother was born and raised in.  In fact, it was in my mother’s family (the Kramer Family) for over 100 years.  The “store” had served as a gas station, variety store, cabinet maker’s shop, and as various other businesses over the years including Joey and Freddy’s Kool-Aid stand. Come to think of it, it probably qualifies as our first restaurant.  And now it was going to be a one-room law office in the middle of a residential city block in Northeast Philly.  No waiting

room, no bathroom (you had to go next door and see my parents and grandmother if you needed to relieve yourself), no secretarial area, no conference room.  Just a room with a desk and a couple of chairs for the clients I did not yet have.  By the way, if you did have to use the bathroom, good luck getting out without a shot of homemade anisette and my father playing the Notre Dame Fight song on his harmonica.  But Dad was excited and built the best one-room law office on Jackson Street with the help of Uncle Al, a union electrician, and my incredibly supportive mother who would carry sheetrock, spot nails, and roll paint if that’s what it took to help her kids.  Joan get this; Joan get that, still music to my ears.  Tom Dempsey, a/k/a “Marvin”, a Moss Playground legend, installed the carpet and Pep Boys donated the 30-year old executive desk complete with broken chair complements of my brother Fred.  But the shingle quickly went up and the Stampone firm was established.

My secret weapon worked, before long friends and family began to refer clients from all over the neighborhood.  I was the busiest attorney in a two square block area.  Nothing but big cases – – like the fly in the water-ice case, and the guy who ran into a street sign while being chased by a bee.  I was on the map.  As the word spread, my client base grew.  Before long, they were lined up in my waiting area “on the curb” out front.  I knew then I was doing something right.  These new found clients were just like my family and friends, salt of the earth.  Hard working blue collar people.  Construction workers, factory workers, cops and firemen alike.  They went to schools like North, Judge, Frankford, and Lincoln, and they grew up hanging in the playground.  They were guys with nicknames like Hog, Bird, Killer, and Quack, just to name a few.  They summered in Wildwood, fondly referred to as the Kensington Riviera by my childhood friend, John Hagan.  The clients were just like me without the law degree.  I talked to them in a language they understood and I returned their calls…always return their calls…put it on my tombstone!

The practice grew, our family grew, and before long, I needed a partner.  Drew D’Angelo, smart (President of his Class at George Washington High), confident, tough neighborhood kid with a golden tongue.  He knew how to settle cases and knew how to take them to trial.  As long as he didn’t have to speak with the clients, he was happy to make money.  A new tandem was born, Stampone & D’Angelo.

With our growing practice, we moved into offices on Township Line Road just past Burholme Park in 1986 and remained in the same

location for 18 years until moving into our current office in 2004.  Now known as Stampone Law, the firm has matured and grown over the years, and our office is a modern, efficient, and prosperous place of business.  A wonderful mix of experienced litigators and youthful energy.

And although associates, attorneys, and staff have come and gone over the past 28 years, there remains a constant in this most unplanned business plan…..YOU, friends and family of my friends and family…..and ME, always one of YOU. 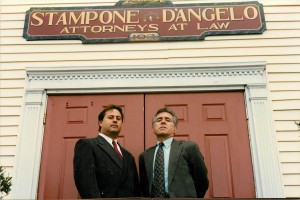