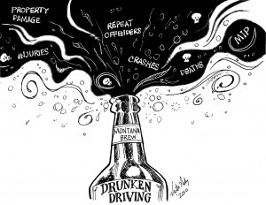 You can file this story in the sadly-true-and-sadly-funny folder: a 36-year-old man was arrested after driving his truck into a bar in New Brighton – which is just outside Pittsburgh.  While he was behind the wheel, the man was already drunk.  Upon plowing his truck into the bar’s wall, he asked its owner for another drink.  After he refused (which was undoubtedly an easy call), the bar owner tried to keep the drunk man from driving away,  Although he was unable to do so, the drunk man was later found by police and arrested.

One piece of good news behind this story is the fact no one was hurt.  There are no reports of anyone else in the truck with the drunk man.  Nor were there any indications anyone inside the bar was hurt.  The driver, himself, seems to have walked away from the accident virtually unscathed.  The tragedy with many drunk driving accidents is the fact other innocent people get hurt.  Some of them even die.  According to the advocacy group, Mothers Against Drunk Driving (MADD), there were nearly twelve thousand alcohol-related crashes in Pennsylvania in the year 2012, the latest year for which figures were available.  From those crashes, there was just over 8,700 injuries and over 400 deaths.

How and Who a Drunk-Driving Accident Victim Can Sue

Most people expect they can sue the drunk driver when they are injured in a crash.  But under Pennsylvania’s limited tort law, limited tort policyholders are prevented from seeking non-economic damages such as pain and suffering unless the accident falls under an exception.  They can only seek to collect non-economic damages if the drunk driver was convicted of driving under the influence or accepted into an Accelerated Rehabilitative Disposition Program (ARD).  This means it doesn’t matter whether the injured party believed the driver was drunk or even if the would-be drunk driver was arrested, if you are bound by limited tort. If you are bound by limited tort,  there must be either a conviction or an acceptance of ARD.  If you selected full tort coverage, you may sue for all damages without satisfying the exception.

However, someone who has been injured in a drunk-driving accident may have other options.  The Commonwealth has its own Dram Shop law, 47 P.S. Section 4-493.1, which prohibits any bar, restaurant, tavern, brewery, or any other business to “sell, furnish or give any liquor or malted or brewed beverages, or to permit any liquor or malted or brewed beverages to be sold, furnished or given to any person visibly intoxicated”.  To be successful, the plaintiff must show the business was aware the drunk driver was already intoxicated and continued to serve him or her anyway.  Admittedly, this can be tough to prove.  A plaintiff can also seek damages under the Dram Shop law if the establishment sold the alcohol illegally such as selling to a minor, selling without a liquor license, or selling after-hours.

Stampone Law Can Help You

Because of the many restrictions on tort liability and the various exceptions and situations where an injury accident victim can sue for damages, a lawyer is highly recommended.  A qualified lawyer will analyze the facts, conduct interviews, and hone in on all the evidence to bring a successful claim.  And it’s not just any lawyer who can do this successfully.  The lawyers of Stampone Law, who have years of experience litigating automobile accident and Dram Shop cases, can help you pursue a successful case.