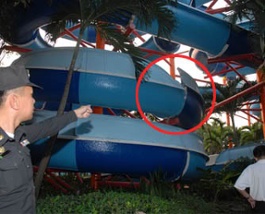 The summer months are great for outdoor activities and recreation with friends and family. When it is especially hot, millions of people every year flock to water parks around the world to enjoy some thrills and cooling off by experiencing the water amusements such as body slides, tube slides, wave pools, and lazy rivers. In 2012, 85 million people visited the roughly 1,200 water parks in North America (Canada, Mexico and the United States). It is estimated attendance grows by 3-5% every year.  The top five most popular water parks in America each see over 1 million visitors a year. The most visited water park in our area is Six Flags Hurricane Harbor in Jackson, New Jersey. They welcomed just under a half of a million people in 2012.

Unfortunately, while enjoying the summer fun on the slides, in the wave pool, or floating down the lazy river, injuries can and do occur. There is a multitude of ways to be injured at a water park so it is extremely important that, as visitors, we obey all the posted warning signs around the park and at each “water amusement ride.” Those warnings are there for a reason, often required by law. Even when we obey all the possible instructions given to us by the signs, slide attendants, and life guards it is possible to be injured. When injuries occur to patrons they may bring a legal action against the owner/operator of the water park who acted negligently or failed to act in some way that caused the injury. The other potential cause of action for patrons is a product liability case against the slides’ manufacturer or any other party involved with design, assembly, construction or installation of the slide.

Each state has its own set of laws and regulations for the design, manufacture, construction and operation of water slide systems and water parks in general. Along with these, states look to industry standards provided by, among others, ANSI (American National Standards Institute) and ASTM International (formerly the American Society for Testing and Materials). ASTM’s relevant standard, F2376, defines water slides as “rides intended for use by riders in bathing attire where the action of the ride involves possible and purposeful immersion of the rider’s body either in whole or in part in water, and uses circulating water to mobilize or lubricate the rider’s transportation along a purpose built path.” These standards combined with the laws and regulations of each state gives the park’s owners and operators clear guidelines as to how best to protect their patrons by following the rules and guidelines.

Pennsylvania and New Jersey have similar laws in this area. Water park owners and operators in NJ and PA must abide by, although different versions of, the same standard: ASTM’s F2376. The following is a brief introduction to each state’s laws on this topic, followed by a brief overview of the ASTM’s “Standard Practice for the Classification, Design, Manufacture, Construction, and Operation of Water Slide Systems.”

New Jersey – New Jersey adopted the Carnival-Amusement Rides Safety Act which includes a subchapter entitled “Water Amusement Rides.” This Act “provides minimum criteria for the design, construction, and operation of water amusement rides.” N.J Admin. Code § 5:14-12.1. This code applies to water slides that are at least 15 feet in height, or any water slide that is located in a water amusement area. If you are injured at a water park in New Jersey, you must see that a written report is made by the amusement park operator within 90 days from the injury, or your lawsuit will be barred.

Pennsylvania – Pennsylvania’s legislature has adopted both The Amusement Ride Inspection Act and the Amusement Rider Safety & Liability Act. The former pertains to the owner and operator’s responsibilities while the latter deals specifically with those duties of the patron and the responsibility to obey and observe all signs, rules, and oral instructions while in the park. The Act applies to all amusement rides or “device[s], including a water-based device, that carries or conveys passengers along, around or over a fixed or restricted route or course or within a defined area for the purpose of giving its passengers amusement, pleasure, thrills or excitement.” 4 P.S. § 502.

Both New Jersey and Pennsylvania are comparative negligence states. This means that if the injured patron was negligent before or during the course of using the slide, and if that negligence contributed to the injury, the damages available to the injured patron will be lessened by the percentage of their own negligence that contributed to the accident, up to 50%. In PA and NJ if a patron’s comparative negligence is determined to be 51% or higher in causing the accident, they will be barred from recovery.

These standards serve as guidelines for the industry. Although they don’t stand up as laws on their own, state legislatures have given them the effectiveness of laws through legislation. These standards define terminology related to the industry and set forth responsibilities of the manufacturer, owner/operator, and patron of a water park.

The manufacturer is responsible for making a safe slide pursuant to other laws, along with determining the number and type of riders allowed to participate on each individual water slide. Manufacturers also must give a recommendation for things such as daily inspections, specifications of tubes or other “vehicles” utilized on the slide, and other operational requirements that must be met before a water park may open its doors to patrons.

The owner and operator of the park must have written procedures in place to deal with a number of scenarios that may occur over the course of business. These procedures include what the operator must do to detail an accident on one of their slides that involves injury to a patron. The owner and operator is also responsible for displaying a number of different warning signs throughout the park and around the entrances to the slides, informing the patrons of the “proper rider position” while riding the slide, giving verbal instructions about the rules of each slide to the patrons before they ride the slide, and giving a set of physical limitations, including certain health conditions and height and weight maxima and minima, that may prohibit certain individuals from riding the slide. The owner and operator is also responsible for developing a communication system between the slide attendants and water safety staff that allow the slide to operate as safely as possible.

The patron’s responsibility is very important for the purposes of a personal injury suit against the park. Part of this responsibility requires understanding that there are inherent risks associated with participation in or on any amusement ride, including water slides. All patrons of amusement parks, by law, accept the risks inherent in participation with such rides that an ordinary or prudent person is or should be aware of. Riders must exercise good judgment and act in a responsible manner while riding the slides.

This is where Stampone Law comes in. At Stampone Law we have handled many cases involving water slide accidents involving both body and tube or other “vehicle” slides. If you or a loved one has suffered a serious bodily injury while riding a water slide, contact the experienced attorneys at Stampone Law today.