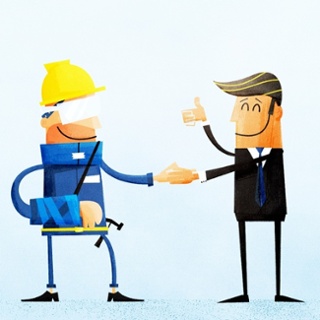 I have spent a good portion of my professional life working within the auspices of elected officials who make up Federal and State Government. I always believed when it came to the politics of political affiliation “it’s not personal, it’s strictly business”.

Times have changed. Politics is no longer “strictly business” it has evolved into “strictly show business” which consistently rears its ugly head when it comes to issue based political opportunism. It matters not whether you are democrat or republican, this breed of political opportunism is inherent within party ideologues. Case in point involves proposed legislation making substantive changes to Pennsylvania’s Workers’ Compensation Act:

While reading the monthly print edition from the Pennsylvania Association for Justice, I came across two articles written by Susan Nanes and David Tyler both discussing the same topic, HB 1800, a proposed House of Pennsylvania Bill sponsored by Rep. Ryan Mackenzie, (R) Lehigh Valley. HB 1800 proposes altering the treatment guidelines afforded injured workers as regulated by the Pennsylvania Workers’ Compensation Act (“The Act”). The core of HB 1800’s proposal provides for a shift from “individualized care to evidence based medical treatment guidelines.” The proposed legislation creates legislatively appointed committees which would have regulatory authority to impose new treatment guidelines that cover injured workers in the Commonwealth of Pennsylvania. Needless to say, these committees have no direct accountability to Pennsylvania taxpayers. Ms. Nanes and Mr. Tyler present stark opposition to HB 1800 by effectively discussing issues related to the language of the Bill, the proposed intent of the Bill, the perceived actual intent of the Bill and the industry of Workers Compensation as a whole. Rep. Mackenzie has stated that the guidelines proposed by HB 1800 “has successfully controlled costs, mitigated the frequency of surgery and reduced the volume of addictive pharmaceuticals…” among other benefits. The Pennsylvania Bar Association has publically opposed the Bill and has issued a resolution in opposition. In my opinion, HB 1800 hurts Pennsylvania workers because the proposal to move to evidence based medical guidelines will make it more difficult for injured workers to get the treatment they need.

Here is how I look at a piece of proposed legislation; The first step as shocking as it may seem is I read it, I then immerse myself in enough due diligence to understand differing perspective and find reason. Finally, I determine who would most and least benefit from enacting the legislation. Politics aside, here is my reading of HB 1800; it certainly does not appear to benefit injured workers, which I thought was kind of the point of Pennsylvania’s Workers’ Compensation Act.  The Act came about pursuant to a “grand bargain” over 100 years ago where workers agreed to give up their constitutionally protected right to sue when injured during the course and scope of their employment in lieu of collecting workers’ compensation. The Act was originally intended to protect workers’ and be claimant oriented. Certainly, as in any industry (or regulatory created ones) there are individuals and companies that use the system to benefit themselves. When our Government leaders create or propose change, we need to conduct an analysis of the perceived benefits and perceived harms. The benefits of HB 1800 are truly realized by insurance companies; HB 1800 presents the greatest harm to injured workers. Our elected leaders need to be consistent and stop bending to issue based political opportunism that benefits them, their political party and their campaign contributing flavor of the month.

I have had opportunity to get to know Rep. Mackenzie over the past few years, I find him to be a principled individual and a dedicated public servant. “It’s not personal, it’s strictly business,” with that in mind, all I can think of as I come to understand this bill in light of Ms. Nanes’ and Mr. Tyler’s articles is the once fervent opposition to the Affordable Care Act (“ACA”). There was once a time when republican federal and state officials alike rose in opposition to the ACA, regularly decrying the ACA’s operation of taking a patient’s medical care away from a treating physician and railing against the creation of appointed panels that were disconnected from tax payers and beholden to bureaucrats. This is the problem with the show business of politics these days, it reminds me of what my father used to tell me when I’d argue back after he told me to do something, “do as I say, not as I do”.  The new rule of party politics is we are against something until we are for it.

HB 1800 is a proposal that empowers an appointed committee within the Department of Labor and Industry to prescribe treatment guidelines for injured workers. This sounds like expanding government which I thought the republican party was opposed to. Further, the treatment guidelines maintain that medical care is only necessary and reasonable when the injury or medical care fall within the guidelines. This sounds like medical care being dictated not by a treating physician but by a bureaucratic committee which is also something I believed the republican party was opposed to. It gets worse; HB 1800 most disheartening proposal provides an injured worker who is denied medical treatment pursuant to the new guidelines and chooses to contest that ruling, the burden of proof shifts to the injured worker to prove the medical care is both reasonable and necessary. Does this sound like a system designed to be claimant oriented? Does this sound like a fair bargain for Pennsylvania workers’ giving up their constitutionally protected rights? Does this proposed legislation benefit injured workers? Taxpayers? Or insurance companies!

When a resident of the Commonwealth of Pennsylvania is injured during the course and scope of their employment they need to know there is a system in place that protects them. Injured workers are men and women with families and homes, injured workers are professionals and blue collar workers, injured workers are our friends, family members and constituents. The changes proposed by HB 1800 hurts injured workers at a time when they need help most by creating barriers to treatment. I know I know, how about all those frivolous claims this will prevent, Ms. Nanes addresses these as “straw man arguments”, noting that “loss cost filings” which is the mechanism for setting insurance premiums for employers has actually decreased every year since 2012. So, who does HB 1800 benefit? Not Pennsylvania workers and not Pennsylvania tax payers. It certainly does appear to strongly benefit Pennsylvania insurance companies though.