The Rose Garden – A Documentary on the Roseto Effect 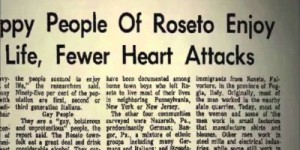 I had the unique opportunity to be interviewed for a documentary about Roseto Pennsylvania and its historical significance related to heart disease research.  My great grandfather, Nicola Rosato, was the founder of Roseto in 1887.  The documentary was produced by Gabriella Flamini, a digital media student at Ryder University in Lawrenceville, NJ.  The documentary chronicles the “Roseto Effect” and the almost inexplicable absence of heart disease in Roseto, the first 100% Italian borough in the United States.  The vast majority of residents were immigrants from Roseto Valfortore located in the Southern Italian province of Foggia in the region of Puglia.  Of note, the background music accompanying the documentary is the harmonica playing of my 86-year old father, Pete Stampone – – not only a strong heart, but a big heart.

Well known author, Malcolm Gladwell, writes about the “Roseto Mystery” in the introduction to his book, Outliers: The Story of Success.  Outliers debuted at No. 1 on the New York Times Bestseller List and held that position for 11 consecutive weeks.  Gladwell is also known for The Tipping Point and Blink, both of which sold over $2.5 million copies.