Dangers and Liability of Texting While Driving 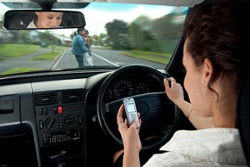 Texting while driving is one of the most dangerous activities a person can take part in. A judge in Lawrence County, PA agreed to the extent he allowed a claim to move forward against two text-message senders who may have known or had reason to know the recipient of their messages was driving and would view the texts at the time of the accident. The texting allegedly caused the driver to become distracted and to crash into a motorcyclist who later died from his injuries. The complaint named the driver of the vehicle as a defendant; however the two additional individual defendants were undoubtedly shocked when Judge John W. Hodge overruled their preliminary objections to dismiss them from the case. The case is Gallatin v. Gargiulo.

Judge Hodge’s overruling of the text senders’ preliminary objections means that for the first time a Pennsylvania court, could hold a person who sent text messages to a driver, liable for injuries to third persons if the injuries were proximately caused by the driver’s reading of the text messages. The injured plaintiff must show that the text message sender knew or had a “special reason” to know the recipient of the text was, in fact, driving and would likely view the message while driving; a high burden of proof.

At first glance, this appears as another result of our overly litigious society. It also appears, however, to be a logical extension of the law as our legislators and courts try to hold distracted drivers reasonably accountable for the consequences resulting from their dangerous behaviors. Our society has faced similar circumstances in the past when reexamining seat-belt safety and drunk-driving.

Currently, there are no statutes or case law in Pennsylvania which impose a duty of care on a person who sends a text message to a person driving a car or to others that may be injured by the driver. There is, however a recent case from the Superior Court of New Jersey that addressed this exact issue. Kubert v. Best, 432 N.J. Super. 495 (App. Div. 2013). The New Jersey intermediate appellate court reviewed the common law rules to determine that there is a limited duty placed on the sender of text messages in a set of very specific circumstances. “[W]hen a texter knows or has special reason to know that the intended recipient is driving and is likely to read the text message while driving, the texter has a duty to the users of the public roads to refrain from sending the driver a text at that time.” Kubert, 432 N.J. Super. at 519. The court arrived at this imposition of a new duty by looking at cases with analogous scenarios and also analyzing two sections of the Restatement (Second) of Torts; § 303 and § 876. There were no relevant cases in NJ or PA, which is why the court looked to the Restatement for the general principles of tort law.

Section 303 holds a person liable for performing an act that was intended to, or that the actor realized or should have realized, was likely to affect the conduct of another as to create an unreasonable risk of harm to the other. Restatement (Second) of Torts § 303 (1965). Therefore, as the NJ court noted, it could be negligent to send a text message to a person driving a car if the act of sending the text is likely to create an unreasonable risk of harm (car crash) by sending the text.

Section 876 is comparable to aiding and abetting a negligent act. It states that a person is liable for harm to a third person caused by another if he or she is aware that the other is breaching a duty to that third person and gives them “substantial assistance or encouragement” to continue with the negligent behavior. Restatement (Second) of Torts § 876 (b) (1965). Liability may also attach to the person if he or she “gives substantial assistance to the other in accomplishing a tortious result.” Restatement (Second) of Torts § 876 (c). As translated by the NJ court, this means that a text sender could be liable for harm to a third person injured by the recipient of the text because the sender was aiding and encouraging the breach of the driver’s duty to the public (duty to drive the vehicle on public roads without being distracted). Aiding and encouraging another’s tortious behavior is itself a breach of duty to the injured person.

In this Lawrence County, PA case the court merely allowed some of the claims to proceed past the preliminary objection stage. This means the senders of the texts could be liable for the injuries to the motorcyclist who died, but it is questionable since the NJ case is not binding authority in PA (PA courts do not have to follow NJ case law)  and the burden of proof established in the NJ case was very high. Although the liability of the text senders would be a first in Pennsylvania, it is clear the law in this area of distracted driving is in ongoing development.

If you or a family member has been injured as a result of distracted driving, call one of our skilled attorneys at Stampone Law, today, for a free consultation.