Who is Liable for Bicycle Accidents in Philadelphia? 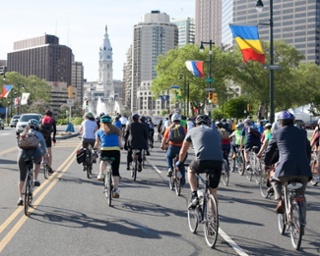 Spring is here and as sure as the flowers bloom cyclists will hit city streets in droves. Philadelphia is home to over 435 miles of bike lanes not to mention beautiful waterfront and off-path trails. The City of Brotherly Love is superb for bikers, that is, unless you’re a driver.  As somehow who frequently partakes in both modes of transportation, I can assure you the feeling is mutual.

Through bike-share programs such as Indego, it’s easier now than ever for a casual rider to go for a spin. But who is responsible when a biker is involved in an accident which causes injury? Well, that depends.

Who is liable when a bike and car crash?

A bicycle is considered a vehicle. As such, most of the rules which apply to drivers of an automobile also apply to bikers.  A biker who does not follow road rules or keep a proper lookout may be responsible for an accident. Like most auto accidents, bicycle accidents typically occur at intersections which can lead to questions regarding liability. Typically, whoever had the right-of-way will not be held responsible.

Determining right-of-way is straightforward when it comes to intersections with traffic lights or four-way stop signs. The tricky situation arises at intersections where a biker has the right-of-way on a street without a stop sign and a car comes from a street with a stop sign. In such a situation, even though a biker is not nearly as obvious in traffic to a driver as an automobile, they still have the right-of-way. However, if the biker was riding against the flow of traffic, as I see daily in Philadelphia, fault may be attributed to both the driver and the biker.  Whether you’re a driver or biker, it’s best to approach Philadelphia intersections with caution this spring.

Who will pay my medical bills?

Pennsylvania is a no-fault state. Meaning, your medical expenses are covered by your own auto insurance policy regardless of who was at-fault for the accident. If your bills exceed your covered amount your health insurance would likely kick in to pay the remaining balance. Many people assume auto insurance only applies when you are injured in your car. Rather, coverage under this policy extends to the injured biker or even a pedestrian who is struck by a car.

Who will reimburse for me for pain and suffering?

If the driver was negligent in causing the accident, the biker will likely be able to recover damages for pain and suffering from the driver’s liability insurance. If the biker was injured in the course and scope of their employment they would also have a workers compensation claim.

Assuming the biker was negligent, the driver may recover from the biker’s liability insurance. The driver should also investigate whether the biker who caused injury or damage was in the course and scope of their employment. If so they may be covered under their employer’s insurance policy as well as their own.

Have you been injured?

Accidents involving cars and bicycles typically result in serious injury. While I have described simple situations, Philadelphia’s law surrounding this issue can be very complex. Further, insurance companies do their best to muck up the water by complicating the issues and hunting for loopholes. So if you’ve been injured, contact us today for a free consultation. Whether you are a driving down Market Street or a biking Kelly Drive, be safe out there.