A Day In The Life Of A Litigator 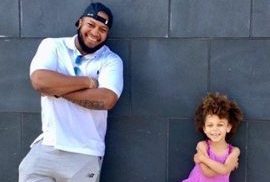 It’s no secret  the attorneys at Stampone Law are relentless in the pursuit of justice for their clients—but you may or may not be surprised to know that this tireless spirit also carries over into football.  “I broke my ankle, pretty much at the very start of a [football] game, I didn’t know it was broken, I knew it hurt like hell but I just kept going…the next day I showed up with a cast, a boot, the whole nine yards, my coach was confused…” Prince Holloway, Trial Attorney at Stampone Law admits. “I probably made it a lot worse, but I am a competitive person, and didn’t want to give up.”

This competitive spirit is one of the reasons why practicing law suits Prince so well, “Being a lawyer means you wake up every day ready to compete, it’s the closest job there is to playing sports. Every day someone wants to kick you down, and every day I get to wake up and take that challenge on.” Prince’s upbringing also played a big part in his career decision: “The Jesuits taught me that being a man for others means helping people out, I love rooting for the underdog, I like fighting for people, I have a strong sense of what’s right and what’s wrong and I like to see justice served”.

Prince’s journey into the legal profession began in the Wynnefield section of Philadelphia where he grew up with his father, mother and 2 brothers. He belonged to St. Barbara’s Parish and attended St. Joe’s Prep. After high school, he attended Purdue University and then went on to graduate from Widener University’s School of Law. Shortly after, Prince began working as a Prosecutor at the District Attorney’s office in Montgomery County, where the motto was ‘Do the right thing for the right reason.’ As he describes it: “I was able to help a lot of people, especially young kids of color who looked like me,  kids and young adults make stupid decisions without the right guidance, I felt like I was able to help them along their way and get them on the right path.” At the time, Prince held down 3 jobs, Prosecutor by day, pizza delivery guy & valet by night. After spending some time learning the ins and outs of criminal law, he decided to make the move to an area of law he felt equally as passionate about: Personal Injury. “I knew I wanted to help people, almost everyone I know lives paycheck to paycheck and they don’t have money stacked aside in case something bad happens. I chose Personal Injury law because I knew I could make a big impact in someone’s life… Most times when a potential client calls me it’s the worst day of their life, they either suffered a bad injury or they have been arrested and need guidance and help—I love knowing I can help in such a stressful time.”

The decision to move to Stampone Law was brought on by a relationship Prince had with our attorney Kevin O’Brien. Prince worked with Kevin’s wife at the DA’s office, and wound up connecting with Kevin through a referral relationship in his next role at a local personal injury firm. Working with Kevin and the Stampone Law team was a natural fit, and Prince liked that they would take chances with their cases—regardless of how difficult it might be. “The attitude engrained here is that we don’t get outworked by anyone.” It also helped that Prince felt an immediate connection with the team. His first interview took place at Ashton Cigar Bar, and shortly into the conversation it clicked: this was a team of normal Philly guys doing great things.  “There is something about working with people that grew up in the City and had a similar upbringing, plus we all root for the same teams. There is a camaraderie here that fosters a great environment.”

Prince’s responsibilities at Stampone Law vary from basic personal injury matters, such as slip and fall and automobile accidents, to more complex civil matters like construction accidents, product liability, and medical malpractice as well as criminal defense matters. At the moment about 50% of his personal injury practice focuses on institutional abuse cases for children and minors. “When I worked for DA’s office, my job was to put the bad guy away– now my goal is getting my clients just compensation for the transgressions of others.”

One of the best parts of working at Stampone Law for Prince is the common goal the team shares. “At Stampone Law we all work on cases together, it’s a group effort that maximizes value for our clients, on most days we are all bouncing ideas off each other and it’s really beneficial.”

In Price’s spare time, you can find him playing Basketball, spending time with his wife Melissa, and daughter Charlie, partaking in Crossfit activities, or mental sparring with opponents over a game of chess (challengers welcome). In addition, Prince serves on the Board for Guadalupe Family Services in Camden, an afterschool program for kids that provides them with a hot meal and help with their homework.