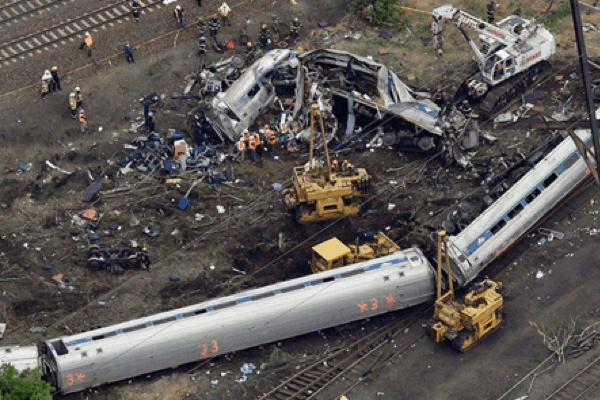 More than 8,500 people were hurt last year in accidents that occurred along the 200,000-plus miles of track that make up our country’s sprawling railroad system, according to data published in the latest quarterly report from the U.S. Bureau of Transportation Statistics. In 2015, that figure was closer to 10,000 as one of the most perilous derailments in recent memory was responsible for eight deaths and hundreds of more injuries on May 12th in the Port Richmond section of Philadelphia. The National Transportation Safety Board officially determined that the derailment of Amtrak Passenger Train 188 was caused by an error of “crewmember situational awareness” when Brandon Bostian, the train’s engineer, allegedly became distracted by an unrelated emergency radio call and accelerated at a rate of speed more than double the legal limit prior to impact.

You may be surprised to hear it, but train tracks do in fact have strictly-enforced speed limits just like our roads and highways. They, too, are carefully crafted and agreed upon by various governing bodies in order to ensure our personal safety while in transit. In the tragic case of Amtrak Train 188, Bostian had his locomotive reach speeds as high as 106 miles per hour before attempting to navigate a curve at Frankford Junction that possessed a speed limit restriction of 50 miles per hour. In the organization’s post-accident investigation, the NTSB found that “the most likely reason the engineer failed to slow for the curve was he believed that he was beyond the curve where the authorized speed was 110 miles per hour, because of his loss of situational awareness.” Despite the NTSB’s ruling, defense attorney Brian McMonagle contends that it still remains unclear what exactly caused the train to accelerate on that fateful night.

The criminal case against Bostian (in which he’s been charged with 200 counts of reckless endangerment, eight counts of involuntary manslaughter, and one count of causing a catastrophe in Philadelphia’s Court of Common Pleas) has drawn controversy from its beginning. The Philadelphia District Attorney’s Office first declined to prosecute the 34-year-old, but Pennsylvania Attorney General Josh Shapiro presented enough information to Common Pleas Judge Kathryn Lewis for her to reinstate the charges against Bostian back in February. It is important to note that Bostian has been fully cleared of accusations that he may have been driving while under the influence or using his cellphone leading up to the accident, which today stands as the deadliest to occur along Amtrak’s Northeast Corridor since 1987.

Further complications with the presentation of additional evidence, specifically onboard video footage taken during the crash, have brought us to this case’s latest development: The postponement of Bostian’s trial until at least 2019. “I am genuinely concerned that the law enforcement agencies that’s prosecuting the case doesn’t have everything they need. I know I don’t have everything I need,” McMonagle said when expressing his concerns to the Associated Press earlier this month. The state Attorney General’s Office has reported that the NTSB recently made the Bostian case “a priority” and has begun to release photographs, audio recordings, and other materials requested by the two sides in court. “We agreed in September to expedite the process of FOIA documents related to this case, and that’s what we’re doing,” Eric Weiss, an NTSB spokesman, told the AP.

As for the victims of this unexpected and horrific derailment, Amtrak has accepted full blame for the incident and agreed to one of the largest railroad crash settlements in U.S. history. With Congress having bumped the maximum sum for large scale, rail-related accidents from $200 million to $295 million in December 2015, the transit company will pay out a total of $265 million to avoid further civil litigation. The terms of the deal bound Amtrak and its insurers to fulfill all payments for claims made by the victims by February 2017 through use of a court-approved trust. “We are profoundly sorry for those who have lost a loved one, were injured, or are otherwise impacted by this horrible event,” Amtrak President and CEO Richard Anderson said in a statement following news of the settlement.

Riding public transportation is a way of life for many Philadelphia residents, and accidents are bound to happen. From 2014 to 2015, SEPTA received 3,400 claims of injury and were sued by nearly 1,500 people. In the event of a transit accident, all we can do is pray that the level of severity is not that of Amtrak Train 188 and that our interests are protected by well-meaning and caring attorneys. If you have been injured while riding mass transit, call Stampone Law today! We have been highly successful in litigating transit accident claims, including those against SEPTA and Amtrak.