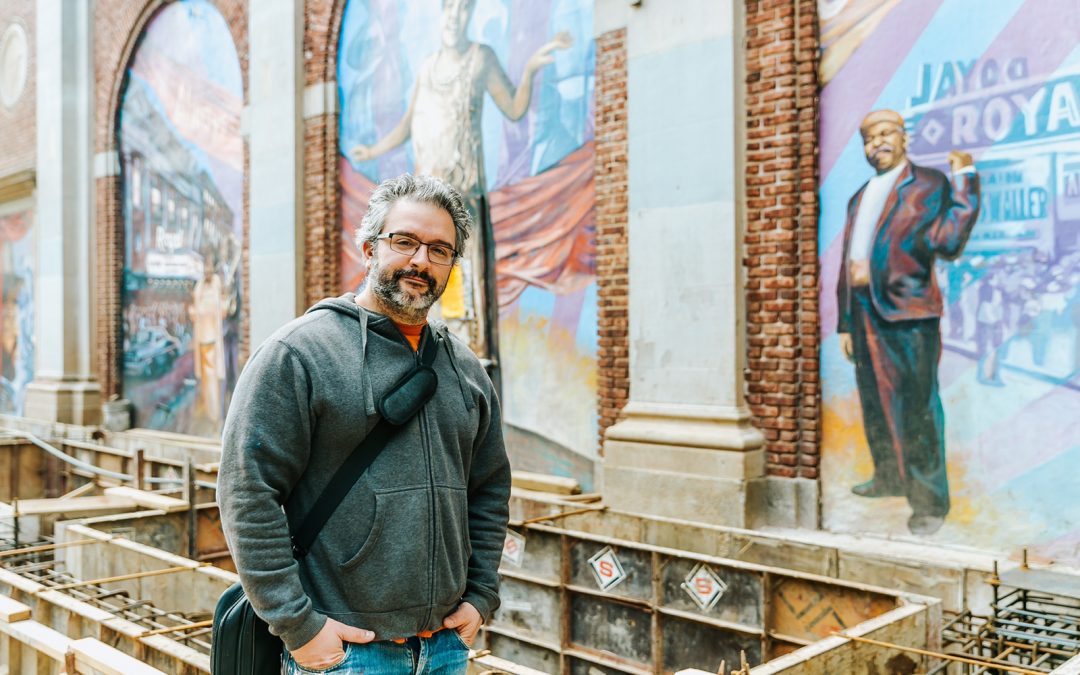 Philadelphia based muralist, Eric Okdeh began creating public art in 1998. After receiving his Bachelor of Fine Arts degree in painting from Temple University’s renowned Tyler School of Art, Eric chose to focus on socially engaged public art exclusively. He came to that decision after comparing the experience of his first solo exhibit as a painter, with what he knew to be true about the process of creating inclusive large scale public works and the impact that process has on communities.

Eric believes community driven public art has the ability to provide a voice to those who feel disenfranchised and powerless. Eric has created multimedia projects tackling difficult subject matters, such as gambling, addiction, mass incarceration and overcoming the stigma of mental illness. Central to the process is conducting interviews in communities. Using art as a means to gather personal narratives, he is able to bring people’s stories to life and create a dialogue that is cathartic and promotes empathy and understanding. Additionally, the use of technology and social media platforms allow the conversation to continue beyond the completion of the physical work.

Eric has facilitated art and mural making workshops in a wide array of communities including teens and adults, incarcerated men, as well as people in recovery programs. These classes serve as a vehicle for skill building, leadership and teamwork exercises, which culminate in major mural projects. Eric has found that the process of mural making provides a sense of inclusion and accomplishment among its participants that in turn empower them to take ownership in their work.

When collaborating on ideas for a mural with a team of other artists, Okdeh looks for overarching themes, or “aha moments,” within the conversation to shape his idea of what the mural should look like. Once he gets an inkling of an idea, he starts the process of beginning the mural. Along the way, he seeks feedback from others to see if his vision is manifesting in the way he intended.

One of Okdeh’s favorite mural pieces in Philadelphia was one he completed with patients at Kirkbride Rehabilitation Center. As a group, Okdeh and patients of Kirkbride designed and completed a huge piece located at 56th & Chestnut Street in Philadelphia. “Being able to work with people at that specific phase in their lives was an incredibly rewarding experience,” he commented. “[They] created a lot of their own work and went beyond their own expectations of themselves to create this piece of art as a group.”

“[Stampone O’Brien Dilsheimer Law] was very cut and dry in terms of what they wanted,” Okdeh commented. The law firm was interested in implementing a piece focused on justice, and showed the artist images of what they were looking for. Okdeh drew upon the building’s physical properties to create the mural. “That wall is very unique,” he said. “The triangular top to it made me think of certain types of classical architecture. A lot of it was site-specific, which is mostly how I work.”

When it comes to Okdeh’s murals, each one is dramatically different. “You wouldn’t be able to just pick up one of my designs and put it on another wall,” he remarked.

In the artist’s eyes, the Stampone O’Brien Dilsheimer Law mural was especially interesting due to its location in the city. “[There isn’t] a lot of mural art around there, so it’ll stand out on it’s own,” the artist commented. The nature of the law firm building’s location and its proximity to a busy street ensures that passersby will obtain a good distance from the wall, and therefore will have ample time to observe the mural in its entirety. “It will create some unique moments in traffic,” said Okdeh. “A lot of people are going to be able to see it when they drive in traffic.”

Over the past few years institutions, city governments and organizations around the country have hired Eric to consult on projects in their cities. With over 20 years of experience in mural and mosaic making, and working with diverse populations, he brings an enormous technical skill set that help groups utilize art making as a process for community engagement and discovery.

Eric has over 150 public art commissions throughout the northeast United States as well as murals in Hawaii, Spain, Jordan and Norway. He is proud to have created public art with the City of Philadelphia Mural Arts Program, and multiple Percent for Art programs and other public art organizations throughout the US and the world. His work is featured in seven books about public art.