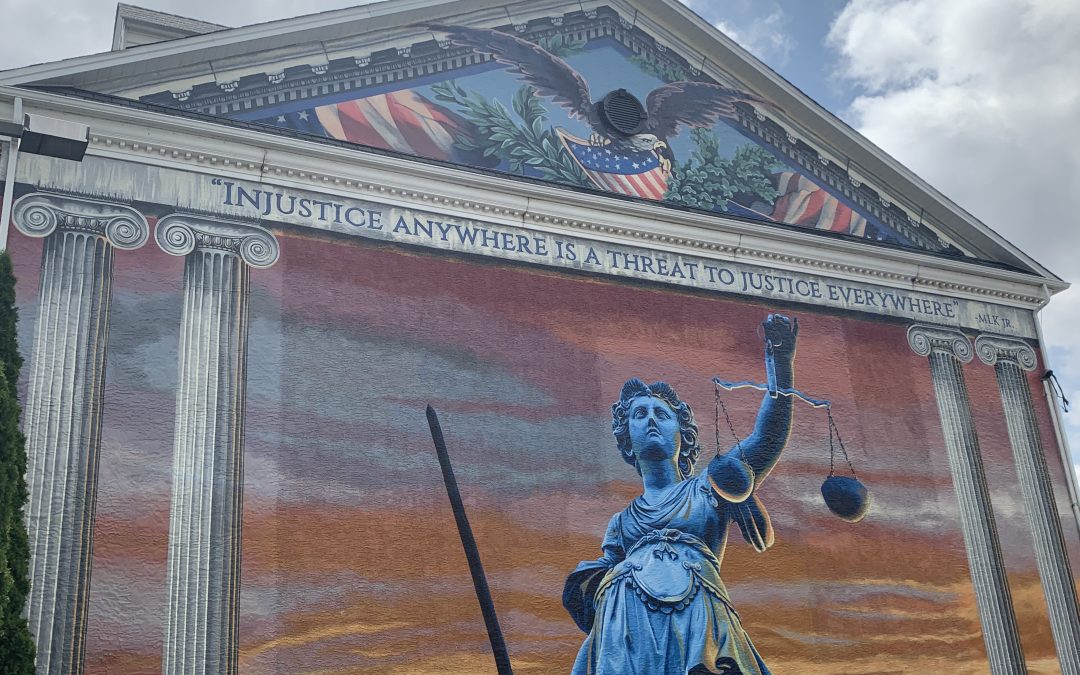 Proudly adorning the facade of the Cheltenham office of Stampone O’Brien Dilsheimer Law is something new, yet at the same time centuries old. Physically it wasn’t there before, but its significance predates the foundation of both this country and most certainly this building itself. Just like the men and women working diligently inside for the best interests of their clients, an awe-inspiring colorful mural of Lady Justice serves as a beacon of hope for all in the local community that wrongs will be righted and the individuals and families who suffered will be compensated accordingly.

Long before this shining symbol of integrity and due process graced his professional home, Montgomery County resident Joe Stampone had been incorporating the principles of Lady Justice into his personal injury practice daily. Since 1984, Stampone O’Brien Dilsheimer Law has passionately advocated for injured clients in Pennsylvania, New Jersey, Florida, and nationwide with the mission to ensure that victims of wrongdoing receive competent representation and the justice they rightly deserve. Under Joe’s leadership, the firm has achieved an unparalleled 98 percent success rate by winning more than 10,000 cases from the time of its founding.

“Justice and injustice begin and end with an individual choice.” says Joe Stampone. “While there may be times when we are powerless to prevent injustice, there will never be a time when we fail to fight it.”

Over the course of four decades practicing law, Joe Stampone along with partners Kevin O’Brien and J.B. Dilsheimer have garnered a reputation as one of the Philadelphia region’s most trusted and accomplished personal injury firms. With a personal touch and dogged determination, the knowledgeable staff of Stampone O’Brien Dilsheimer Law is well-equipped to handle personal injury matters including construction accidents, slip and falls, medical malpractice, defective products, motor vehicle accidents, death and dismemberment, traumatic brain injuries and wrongful death claims. The firm handles more than 400 cases each year and has secured hundreds of millions in settlements for its clients.

Over the first 6 months of 2021, the firm, led by trial attorney Kevin O’Brien, has obtained settlements of $5 million for a negligent security shooting case, $2.5 million for a civil rights case, and $4.5 million and $1.25 million respectively in product liability claims involving forklift injuries. The employees of Stampone O’Brien Dilsheimer Law are a mix of experienced trial attorneys and youthful, technologically savvy litigators, most of whom were named by their peers to the 2021 Pennsylvania Super Lawyers or Rising Stars list.

Joe Stampone’s numerous honors and distinctions include recognition from The Legal Intelligencer as Best Law Firm Mentor in the state of Pennsylvania and lifetime membership in the Multi-Million Dollar Advocates Forum – a prestigious fraternity of elite trial attorneys who have all secured settlements or judgements numbering in the millions. O’Brien and Dilsheimer each have obtained top verdicts in Pennsylvania and New Jersey acknowledged by the National Law Journal, and both equally relish the opportunity to share their courtroom expertise as instructors of continuing legal education at the Pennsylvania Bar Institute.

A motto of Stampone O’Brien Dilsheimer Law is “personal injuries need personal attorneys,” and the firm takes immense pride in aggressively fighting for the best interests of the Philadelphia area’s most vulnerable. This hands-on, community-driven approach to ensuring justice for all inspired the firm to commission a piece of public art that would symbolize Stampone O’Brien Dilsheimer Law’s unwavering commitment to defending its neighbors. Well before today’s social justice movement, Stampone and his partners consulted with the world-renowned program Mural Arts Philadelphia in developing their vision for what is certain to become the latest landmark along the Montgomery County-Northeast Philly corridor. Joe’s son Dan and nephew Tyler, both attorneys at the firm, spearheaded the venture with assistance from Cheltenham native and project manager, Lindsey Rosenberg.

They were referred to Eric Okdeh, a Philadelphia-based muralist who painted a beautifully striking likeness of Lady Justice wielding her sword and balanced scale below the eternal words of Martin Luther King, Jr.: “Injustice Anywhere Is A Threat To Justice Everywhere.” Surrounding Lady Justice are pillars reminiscent of Ancient Rome, where her personification was first introduced as the deity Justicia, or Greece, where the roots of democracy were born. Above in the pediment sits a majestic bald eagle amid the flowing stars and stripes of Old Glory.

Okdeh is an experienced muralist who has been creating public works of art since 1998. He has more than 80 commissions throughout Philadelphia and abroad in countries such as Spain, Jordan and Norway. With over 20 years of experience in mural and mosaic making, and working with diverse populations, Eric has taught mural art classes to children and teens in the city as well as inmates at SCI Graterford prison. He drew upon the physical structure of the firm’s building in conceptualizing the mural, which will stand out as one of the few in the immediate area.

The mural’s messaging bears strong meaning to the firm and its staff, who work tirelessly in their efforts to seek justice for their clients no matter who or what the stakes. Most recently, Stampone O’Brien Dilsheimer Law has represented several individuals and municipalities as part of the national opioid litigation, as well as successfully holding accountable the likes of powerful insurance companies, big pharma, and large-scale product manufacturers.

Law – Joe’s son Dan and nephews Tyler Stampone and Kevin O’Brien, along with Rising Stars Prince Holloway and Andrea Sasso – lead the way as the firm’s next generation. The compassionate attorneys of Stampone O’Brien Dilsheimer Law are presently representing the families of multiple babies who died in infant sleeper products like Fisher-Price’s Rock ‘N Play Sleeper and Kids II Rocking Sleeper, and they’ve vowed that justice will be served in their memory.

As Lady Justice now stands in her permanent place of prominence, watching over the community, the highly skilled attorneys of Stampone O’Brien Dilsheimer Law are right beside her – determined to take on any legal challenge for the betterment of all.