Stepping Up (As Featured In Suburban Life Magazine) 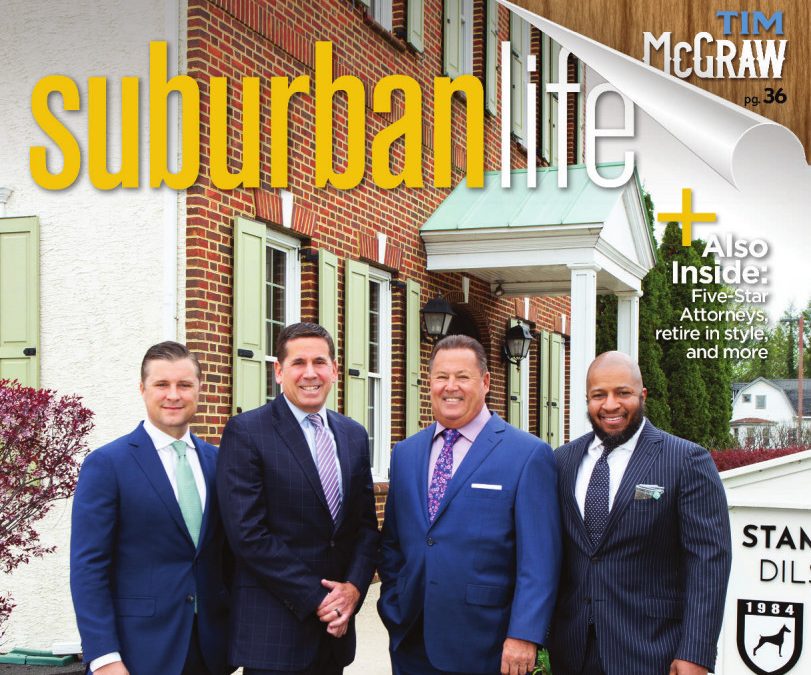 Inside the Cheltenham office of Stampone O’Brien Dilsheimer Law, a team of legal professionals work tirelessly each day to gain ground in the perpetual pursuit of justice for their clients, many of whom find themselves unnecessarily and wrongfully caught up in the brutal wake of society’s most heinous ills.

Gun violence, cases of child abuse and the opioid epidemic continue to lead off nightly news broadcasts and dominate newspaper headlines, as they have going on decades now, and while the great national conversation regarding these hot-button issues has devolved into fruitless debates over prevention tactics, the attorneys of Stampone O’Brien Dilsheimer Law have been present on the frontlines, ensuring that no bad deed goes unpunished.

Under the leadership of Joe Stampone since the firm’s founding in 1984, Stampone O’Brien Dilsheimer Law has garnered unparalleled success litigating cases in its main practice areas, securing countless multimillion-dollar settlements for clients who were the victims of construction accidents, medical malpractice, motor vehicle accidents, and slip and fall claims in Pennsylvania, New Jersey and Florida. With an incredible 98 percent success rate, the firm’s advocacy work in these areas will always continue to be its hallmark for years to come.

But lately, as incidents of violence and lawless disregard have reached record-breaking numbers in both the Greater Philadelphia region and nationwide, Stampone O’Brien Dilsheimer Law has stepped up its efforts to help secure justice in the community so that the healing process may begin for those suffering from any reckless wrongdoing. A large part of this recent shift in focus has been the meteoric rise of partner Kevin O’Brien and the elevation of Prince Holloway, to partner, dubbed the “rainmaker” by Stampone.

O’Brien, one of the lead litigators for the firm, has secured over twenty 7 and 8 figure settlements in just the past few years, earning the respect of his opponents on the defense side of the table as well as the insurance companies that he’s taken up the challenge of holding accountable. In the states in which he works, most of O’Brien’s cases started out as referrals from other attorneys who recognize his unique level of expertise and the firm’s commitment to excellence.

Since beginning with the firm in 2014, Holloway has found success as a member of the litigation team, particularly with cases involving children who have been the victims of sexual or physical abuse. Prince has recovered millions on behalf of his clients who have suffered at the hands of others. Having previously served as an Assistant District Attorney in Montgomery County, Pennsylvania, Holloway successfully prosecuted DUI cases and major felony crimes, including attempted murder, aggravated assault, and narcotics violations.

With versatile attorneys like O’Brien and Holloway, along with Super Lawyers “Rising Stars” Andrea Sasso (4th year) and Daniel Stampone (3rd year), it is a common occurrence to hear a defense attorney or insurance executive mutter… “Not these guys again”, when they walk into the courtroom. In a state with over 50,000 licensed attorneys, Joe Stampone was recognized by Super Lawyers as a Top 100 Lawyer in both the City of Philadelphia and Commonwealth of Pennsylvania. Along with Joe, Super Lawyers named JB Dilsheimer as one of the top 5 percent of attorneys in PA.  JB concentrates his practice in major catastrophic injury litigation and has a wide range of experience in cases involving traumatic brain injury, construction accidents, and defective products.

The credo of Stampone O’Brien Dilsheimer Law is “Personal Injuries Need Personal Lawyers,” and the firm applies that philosophy of personal touch in their work to better the communities in which they serve. A death or catastrophic injury resulting from gun violence or drugs does not only impact the person immediately harmed. The ripple effect extends even beyond family and friends to the larger community as a whole, spreading fear and raising questions regarding safety in our surroundings when criminal or negligent behavior is not brought to justice.

In their unwavering commitment to justice, the attorneys of Stampone O’Brien Dilsheimer Law do not shy away from taking on the toughest of cases, whether that means the legal complexities of an incident involving liability or the emotional toll of passionately advocating for victims who have been wronged in the very worst of ways. Presently as well as in the past, the firm has represented counties and municipalities in the national prescription opioid litigation, including Burlington and Hunterdon counties in New Jersey, fighting to hold the drug manufacturers who contributed to this epidemic responsible for their role in harming the citizens of those counties.

The death of Walter Wallace Jr. at the hands of two Philadelphia police officers rocked the city in the fall of 2020, sparking citizen protests and violent clashes with police. The officers who shot Wallace in front of his family as he was experiencing a mental health episode were not equipped with tasers. The attorneys of Stampone O’Brien Dilsheimer Law were able to collect damages from the city, and more importantly, affect change for the community as a whole on behalf of Wallace’s memory.  As part of the resolution negotiated by the Stampone firm O’Brien, in partnership with Attorney Shaka Johnson, the City of Philadelphia agreed to commit $14 million dollars to train and supply all uniformed police officers with tasers in hopes of avoiding deadly force in similar circumstances. “The reforms and progress we achieved highlights our responsibility as trial lawyers to use our power and skills to make the world a safer and more just place for all of us,” O’Brien said.

Like a good neighbor, Stampone O’Brien Dilsheimer Law looks out for all members of the community in need, especially our smallest and most vulnerable. Following the preventable death of a young infant, the United States Consumer Product Safety Commission issued a recall of nearly 10 million “Rock and Play” products manufactured by Fisher-Price, Kids 2 as well as numerous other infant product makers. The firm has taken up this cause as well and has filed lawsuits to compensate families who have suffered at the hands of these alleged defective products.  Firm founder, Joe Stampone, also serves on the Board of The Superhero Project, a non-profit organization supporting families with babies in the Neonatal Intensive Care Unit (NICU) that was started by Kelly Gallagher, a close friend of the Stampone family.

The attorneys of Stampone O’Brien Dilsheimer Law are compassionate, capable and community-minded individuals who view their work as of the utmost importance toward providing peace of mind to not only their clients, but the general public at large. If you or someone you know has been the victim of injustice, Joe Stampone and his staff are ready to aggressively take up your cause.